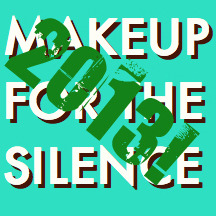 Makeup for the Silence – Best of 2013 Mixtape

Though I’ve done an annual mix each of the past three years*, this year was the first time I actually compiled an ongoing list of my favorite songs throughout the year. You’d think that would make this process easier; instead, I wound up with a glut of sincere favorites, and a lot of hard choices to make. For some reason, I insist on keeping this thing to a >80 minute playtime, i.e. the length of an actual CD. I’m not under the pretense anyone is actually burning this to a disc (I’m certainly not), but there’s something to be said for this mix being digestible in a single sitting, for it being something I can listen to on repeat and actually get familiar with – I like the way albums ebb and flow and tell stories through sequencing and pacing, and it’s something I’ve always put a lot of care into when making mixes. That gets unwieldy in a lengthy playlist. I enjoy getting to the point where I feel unsettled if I hear a song in my mix and it’s not followed immediately by the track that’s supposed to come next.

As always, I’ve elected to leave off any sort of big radio hits (well…kinda. You’ll see what I mean in a second). That’s a challenge in any year – for a guy who mostly writes about punk and other music of that ilk, I’m really a pop fan at heart. But this year was especially challenging. 2013 was the biggest year in recent memory for Superstar Pop – if you’re a musician people call by just their first name, odds are good you put out an album this year. A lot of those albums were genuinely great, and even when they albums were merely OK, or weren’t particularly pop-radio friendly, each seemed to contain at least one or two killer singles.

Not only that, but two artists who I normally would have found room for here, Fall Out Boy and Paramore, came back in such a big way this year that I couldn’t justify squeezing them in – both “My Songs Know What You DId In The Dark (Light Em Up)” and “Still Into You” found Top 40 radio ubiquity, and nobody’s going to be overlooking those acts just because I didn’t squeeze them onto my list. (Unlike, say, in 2011 when Patrick Stump made it onto my mix with a track from his criminally underappreciated solo album).

Finally, this year’s mix wound up especially upbeat; there’s a lot of bright, synthy, dancey pop that really hit home this year (and some moody, synthy, dancey pop to go with it). There were a number of songs I really loved – Defeater’s “Bastards”; View From An Airplane’s “Stayed Awake”; Sparks The Rescue’s “Ceara Belle”; many others – that just didn’t fit here stylistically, and even more – anything by The 1975, for one – that felt too similar to other tracks on here to make the final cut.

That said I’m really happy with how the final mix came out. Download**, listen, enjoy!

**just like last year, there’s a Spotify version of 2013’s mix available, but also like last year, there were a handful of tracks on the final mix which aren’t available on the service. I totally understand Spotify’s convenience – after dabbling with it for a couple years, in 2013 I really converted to using it as my primary listening spot, ahead of iTunes – but I recommend downloading if you want the real deal.