[posted 1/03/18] I never got around to posting my Top Ten for 2015 here on the main blog, so I’m traveling back from the future to edit it in. I also never posted a Best Of The Rest from 2015, but I did find my list I had prepared at the time in an old iPhone note. I have neither the time nor the desire to do any retroactive write-ups, but for the sake of historical accuracy, here we go!

3. Florence & the Machine – How Big, How Blue, How Beautiful [spotify]

THE BEST OF THE REST

Pentimento – I, No Longer [spotify]

SayWeCanFly – Between The Roses [spotify]

The Sidekicks – Runners In The Nerved World [spotify]

If this were 1994, Darlia would be the biggest band on the planet; sometimes, in my head, it is, and they are.

I honestly don’t remember the last time I’ve been knocked on my ass quite the way I was the first time I played Darlia’s debut single, ”Queen Of Hearts.“ Sure, there have been bands that I’ve fallen for from the first notes of my first play before – I was sold on the Gaslight Anthem’s The 59 Sound, my Top Album of 2009, from the opening vocals of ”Great Expectations,“ for one example – but this was something else, or rather it was something more. It was that same feeling, coupled with the sensation of being hurtled back into my own past, to the first time I heard Sloan’s ”Underwhelmed“ or Smashing Pumpkins’ ”Cherub Rock“ or Pearl Jam’s ”Animal,“ songs where I could feel my world shifting under my feet as I listened, thinking nothing could ever sound this good again.

Then they did it again, with ”Animal Kingdom*,“ and then again with ”Dear Diary,“ and then once more with ”Stars Are Aligned“ – for a band that has yet to release anything with more than three songs on it, Darlia managed to rocket four tracks into my pantheon in a single year. Indeed, if you listen to them as four singles off a hypothetical album, they track as if they had been A&R’d by a mid-90s major label – the cracking barnstormer debut, the slightly mellower second-tier second-single, the monster hit crowd-pleaser, and the killer deep cut that fans love.** Darlia aren’t just calling back to a sound that’s as deep a part of me as anything; they’re actually doing it better than most bands of the day did, and at times it literally leaves me breathless.

Now, I know vocalist Nathan Day hates when people call Darlia a grunge band; he confirmed as much for me during a recent opportunity to interview him. I don’t say it to be unkind. I think that Darlia are absolutely sincere in their protestations; they don’t spend time listening to grunge music (actually, Day doesn’t really listen to music at all – something you’ll be able to read more about soon), they aren’t retro-fetishists of some sort, and they don’t see themselves as marching to someone else’s drum. Of course, acts like Stone Temple Pilots were equally sincere (and, in retrospect, correct) about their own lack of connection to the "grunge” scene of their day; to not believe you’re of something is entirely different that to actually not be of it. Sometimes what counts (to the world at large) isn’t where you come from but where you arrive.

Indeed, what makes Darlia’s objections so ironic is that they’re the same objections that were leveled by the bubblegrunge wave 20 years prior. Protesting one’s presumed company is a strategy right out of the bubblegrunge handbook, along with things like 1) lyrics that occasionally misread the cryptic, abstract imagery of Cobain for evocative nonsense*** and 2) massive pop hooks that put anything in grunge’s seminal Scratch Acid-meets-stoner-rock wave to shame.

A third commonality much of that bubblegrunge wave shared was that band members were often thought to be cravenly, grossly desirous of fame (see: Corgan, Billy), a venial sin in the best of times, but a mortal one in that moment, when the ideal of hipster authenticity was the disaffected, heroin-nod cool of a Layne Staley or a Mark Arm.**** Day doesn’t seem to be concerned with putting up a front either, but times have changed – thirst is the new slack, and the odds of being burned for his ambition seem much lower than they were for, say, Gavin Rossdale. He makes no bones about the fact that he’s been plotting Darlia’s future for something like a decade. During our talk, he discussed intentionally avoiding the spotlight out of fear of becoming a here-and-gone sensation, stockpiling hundreds of songs while charting Darlia’s course to avoid the pitfalls of, say, YouTube stardom. Clearly, these are not the concerns of a man without a healthy dose of ego self-confidence or a fear of calculation.

So yes, the shoe indeed fits, even if it’s a fashion Day would never take off the shelf. And yet, ultimately, I’m not sure how much it matters. Much as acts like Pearl Jam and Silverchair greatly transcended the pigeonholes they emerged from, Darlia have the talent and potential to take their music somewhere singular. Indeed, their upcoming mini-album Petals veers off into new directions – shoegazey psychedelia, acoustic fragility – even while reinforcing their core sound. I’m excited for what Darlia might become, even as I know I’ll miss what they’ve already done. Will it hit me like a hammer, the way “Queen of Hearts” or “Dear Diary” did? Maybe not. And yet, if any band ever had a chance…

*Yes, technically “Candyman” was the second single, but b-side “Animal Kingdom” is twice the song, and this is my list so I get to make the rules!

*** I may be selling Day short here – after our interview, revisiting "Queen Of Hearts” revealed a clear meaning in what was seemingly gibberish, a massively important secret hidden in plain sight. I won’t give away too much right now; maybe when the time is right. “Oh, aurora borealis” indeed.

**** Cobain was secretly the most meticulous planner of them all, but he famously presented a too-cool-to-care public image – whether because he was an exceptionally unknowable chameleon, or merely that he was “first to market” with the pose, Cobain’s authenticity generally went unchallenged in his day.

Makeup for the Silence – Best of 2014 Mixtape 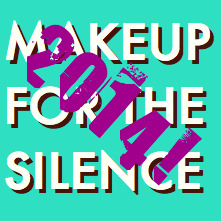 It’s hard for me to believe I’ve been doing this as long as I have, and yet here we are for the fifth year in a row* with the annual Makeup For The Silence Mixtape.

The 2014 edition of my yearly mixtape feels darker, tetchier and more ruminative than last year’s compilation. Partly that’s deceptive: this year’s picks are angrier in their loudest, brightest moments, and more quiet when soft and sweet. Indeed, 2014 was my most blissful in recent memory, full of both personal joy (getting married) and professional success (my first print features in a decade), But as they say, energy flows where attention goes, and the tracks here that demand the most attention rage loudly enough to nearly eclipse the more subtle sweetness in between.

Only nearly, though. Part of the challenge of making the yearly mixtape is in the curation – there were more than 200 songs that made my running Top Tracks Of 2014 longlist**, and paring them down is some combination of making a CD-length document that actually flows as a well-sequenced album would without excluding anything absolutely essential to the year. I spend far more time than any human should working toward hitting the sweet spot each time out; hopefully, I managed it here.

The “no big radio hits” rule wasn’t really an issue this year (sorry Taylor); while I felt like 2014 was much more of a singles year than an albums year for me personally (more on that soon), it wasn’t because of anything on pop radio, which had a seriously down year compared to 2013. I feel like we’re headed toward an interesting intersection – it’s clear to me that the pop-EDM bubble has burst, and there’s definitely renewed interest in music made with traditional instruments, but nobody seems to quite know what to do with them yet (other than sample saxophones, ubiquitously). In the past that’s led to tremendously interesting and diverse years for pop music (think 90-91), but for some reason this year’s casting-about turned up little in the way of interesting experiments – at least not in the Top 40.

And yet the 23 tracks here barely tap the surface; there was tremendous breadth, if not depth, just below. This year’s mix features a pair of refugees from collapsed bands, each digging out of the rubble and starting anew in their own way; two tracks from the best band in the world you’ve never heard of; four minutes of guts-searing #emorevival; and four more of glorious, gossamer #softshread. It’s all in there, Frankensteined together into one rather dapper monster, if I do say so myself.

Stay tuned, The yearly Top Ten will begin in just a few days!

**if you’d like to get a headstart on 2015, feel free to follow my running Top Tracks Of 2015 So Far playlist on Spotify. It’s barren right now but that won’t last long.

***just like the past two years, there’s a Spotify version of 2014’s mix available, but also like those years, there are a handful of tracks on the mix which aren’t currently available on the service. I love Spotify’s convenience, but I recommend downloading if you want the real deal – otherwise, you miss out on a few great songs, and also the sequencing. If you’re a Spotify user, it’s easy to import downloaded files into Spotify, I promise.