[posted 1/03/18] I never got around to posting my Top Ten for 2015 here on the main blog, so I’m traveling back from the future to edit it in. I also never posted a Best Of The Rest from 2015, but I did find my list I had prepared at the time in an old iPhone note. I have neither the time nor the desire to do any retroactive write-ups, but for the sake of historical accuracy, here we go!

3. Florence & the Machine – How Big, How Blue, How Beautiful [spotify]

THE BEST OF THE REST

Pentimento – I, No Longer [spotify]

SayWeCanFly – Between The Roses [spotify]

The Sidekicks – Runners In The Nerved World [spotify] 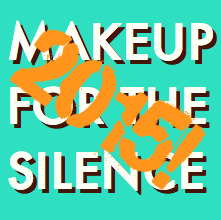 A third of this year’s Makeup For The Silence – Best Of mix (the sixth* edition running!) is made up of no-brainer inclusions – singles that blew my socks off from the first listen and held up across the year. The second third was simply a matter of figuring out which of a number of great tracks from the same artists would slot in best. That third third, though… It was an ugly process this year, attempting to sort through the remaining 170-or-so songs in my Top Tracks Of 2015 longlist** – most of which were of roughly equivalent awesomeness – and arrive at something that both encapsulates what 2015 sounded like to me*** and finds some sort of flow.

As a result, this year’s mix would have been very different had I gone down any number of different paths. The mix that I settled on is one that’s a little harder to pin down than in years past. It’s more of a bummer than last year; while that mix had a lot of righteous anger, this one spends more time toying with melancholia. It leans  groove-heavy, like 2013′s mix; but that album was more sunny than this year’s downer disco. It’s sillier than one of these has been in a while, but more ruminative too.

Ultimately, it feels very true to a year where the big highs were nearly matched by big lows, with the two connected by a lot of unsettling space between – both personally, and on a societal level. Plus, not only does it make for a great front-to-back listen, it answers important questions, like: What if the ‘00s premier big dumb hair-metal revivalists set their sites on the sounds brainier heshers like The Cult? What if David Gilmour had been backed by Crazy Horse instead of Pink Floyd? What happens when a largely forgotten college rock fave gets a hold of Ryan Adams’ cast-offs? And, if you grind a man’s rib in a centrifuge, mix it with cardamom and cloves and then microwave it on the “popcorn” setting, what do you get?

*You can always find the complete collection of mixes which have appeared on Makeup For The Silence, as well as all the playlists I’ve contributed to elsewhere, right over here.

***As always, my “no big pop hits” rule applies – and this time out, be thankful, or else you’d basically have a whole disc of nothing but Drake, Fetty Wap, The Weeknd and Kanye.

*****Between caring for an infant, studying for the FL bar exam and some job-related things that are in the works, the timing of this year’s Top Ten may be a little erratic. That said, if all goes as planned, we start counting down… tomorrow!